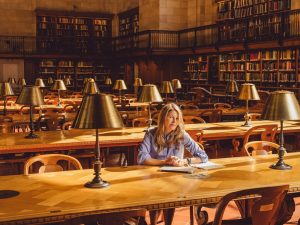 Innovations in brain research and AI-fueled assistive technologies could level the playing field for those with language-based learning disabilities.

Some studies suggest that e-readers may make reading easier for people with dyslexia. Instead of printing dyslexia-friendly special-editions, e-readers can allow users with dyslexia to determine their own settings to create a personalized text that is easier for them to read. A team of researchers from the University of Padova in Italy reported that extra-large spacing between letters allowed a group of dyslexic children to read text faster and with fewer errors. Extra-large spacing reduces “crowding,” in which the recognition of a letter is hindered by the presence of letters on either side. However, the standard spacing between letters works best for normal readers, who read more slowly when spacing is increased.

A study led by psychologist Beth O’Brien of Tufts University and published in the Journal of Research on Reading in 2005, found that the size of letters may also play an important part. The researchers showed both dyslexic and normal readers a passage written in increasingly larger letters, timing how long it took the participants to read each one. The children with dyslexia reached their fastest reading speed at a larger letter size. There are even fonts created specifically for dyslexic readers, such as the font Dyslexie. Some e-readers already allow users to change the font or number of words on a page, and incorporating more setting options into e-readers could help readers with dyslexia even more.